back to overview
Augmented Reality by Netural: Solutions With Real Added V ...
Newsletter

The Silhouette iMirror stands for the idea of enabling eyeglass buyers to authentically try them on using augmented reality, even before going to a dealer for advice. To date this has only been possible on the Internet and as an app.

Now a “large format” iMirror also exists to provide advance information at the point of sale. This kind of digital signage mirror for Silhouette sunglasses has been at Heinemann Duty Free at the Vienna International Airport since 4 July. Name: Silhouette iMirror Public. Developed by Netural.

Nearly everyone at least turns their heads when passing by. Many stop in their tracks to have a look. Since last Friday hundreds of travellers per day jockey for position in front of an illuminated box 2.40 metres tall in the Heinemann Duty Free shop at Vienna airport. They pose in front of the display, turn this way and that, intuitively control the interface with their heads or hand signals. What at the first glance seems playful, promises no less than a look into the future of trying on products digitally.

As soon as a person’s body and face are captured by the cameras, a pair of eyeglasses leap into view and fit like a glove. Even when moving, the eyeglasses retain the right proportions, the correct viewing angles – and continuously in full HD image quality. The installation is operated via various sensors. A software normally used in the production of animated films ensures precise recognition of the viewer. 23 Silhouette sunglasses can thus be tried out at very short notice – in the blink of an eye, so to speak.

From Silhouette’s point of view an important intermediate step in on-site consulting and purchasing: “We stimulate interest in our products. Potential customers can not only view the entire model range but also try them on in advance whenever they like,” Elisabeth Kneidinger, head of eCommunications at Silhouette explains the intention behind iMirror Public. “This new form of display opens up a wide range of possible applications for us and gives us enormous flexibility with respect to the type and location of future product presentations.“ Moreover Silhouette is able to make conclusions as to preferences via the user behaviour also being measured. 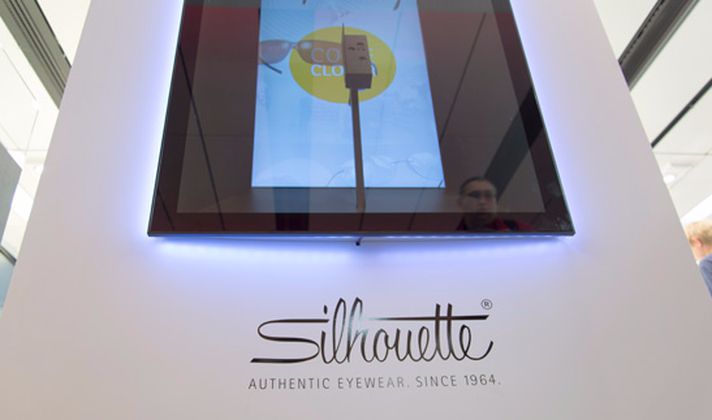 “Digital signage mirror” is the correct generic term for these types of applications. There have already been a few similar cases but they have only been of limited impact. When our longstanding partner Silhouette Eyewear gave Netural Lab the go ahead to rethink the central idea of the “Silhouette iMirror” for the point of sale, it was clear that we could only orient ourselves to existing technology to a very limited degree – even with respect to our own projects: We had indeed already developed augmented reality “fittings” for Silhouette for the internet and an iOS app but the situation of using this in a store or storefront posed totally new challenges on the service design.
For an optimum user experience clear, intuitive gestures had to be developed and made comprehensible for the system. Consumers on a shopping spree tend to “scan” and don’t linger long at individual stations, leaving little time to delve into a product and brand environment. The application was coordinated to this and reduced to just the essential. At the same time it still had to be striking, ultimately is had to be captivating and maximise their time spent there.

A totally new combination of technologies

“There is a great deal of know-how in optimally combining different possible technologies,” our CEO Albert Ortig responded to a question about the challenge. “We have certainly broken new ground here.” And he is well aware of this, as he was thoroughly involved in the Silhouette development as the planner. One can see his delight in the result: “The performance element and means to precisely try on fashionable eyeglasses is absolutely photorealistic and genuinely impressive.”

What happens exactly? The user walks in front of the Silhouette iMirror Public. His image is captured by three cameras. 3D models of eyeglasses are placed right on his face in the full HD mirror view and “reflect” all his movements in real time. Two simultaneous time-of-flight sensors (“RGBD cameras”) – each with different characteristics – capture the person’s face and body in front of the mirror. One of these cameras is the Kinect, developed by Microsoft for its Xbox game console. It also enables the user to interact with the iMirror. The glasses on his face can be changed via simple hand gestures in front of the display, and by simply nodding. Netural developed its own Kinect client to interpret new gestures. 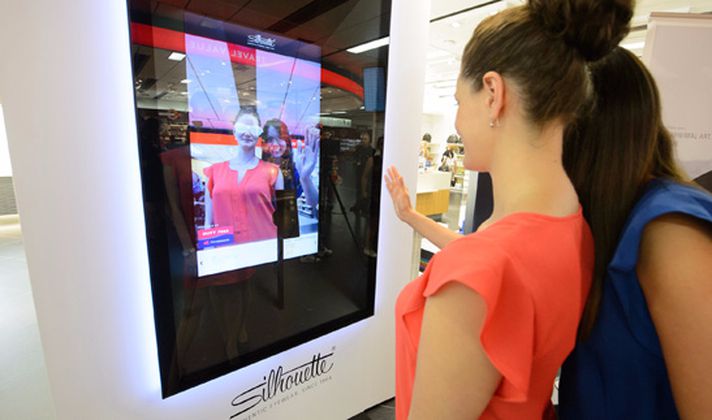 The use of Kinect in applications such as these comes as no surprise to Microsoft. “Indeed we initially limited ourselves to its realisation as a game controller but it soon became clear that this sensor is significantly more versatile,” Thomas Grasslober from Microsoft describes the journey from Kinect’s market launch in late 2010. “We have learned a lot from the enthusiastic developer community.” There is certainly major interest in finding commercially viable ideas.

The use of “Faceshift” facial tracking software to recognise faces is also innovative. This programme is otherwise only used in the production of expensive Hollywood-level animated films so its role in the Silhouette iMirror Public was quite different to its original purpose. For this it had to be designed for maximum availability and robustness. There is future potential dormant in facial tracking. “We can also, for example, react to a user’s facial expression, as we recognise whether or not they’re in a hurry or relaxed,” Faceshift CTO and founder Brian Amberg describes other ideas for POS.

The right location is key for the success. The field trial was held from July to September at a high traffic location, the duty free area of the Vienna airport. “It is very exciting for us to be able to exclusively present such a brand new augmented reality tool,” Adil Raihani, Vice President of Center Managements, is convinced of its success among passengers. There is fierce competition in shopping malls, such as Vienna International Airport. Anyone who can astonish using attractions, will stand out.

The same goes for retail trade. The collaboration resulted in an interesting example case for Heinemann. “The field of eCommerce is now an integral element of the classic, stationary duty free shop at Heinemann Duty Free,” Constantin W. Wiesmann, Managing Director of the Vienna branch outlines the focus from the retailer’s point of view. “Correspondingly linking stationary trade and eCommerce will be a topic for the next several years – for us and for many others.”